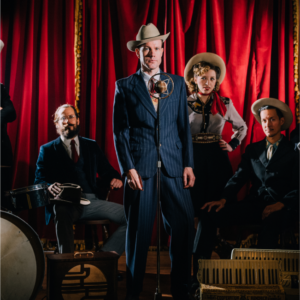 A Jay Wade and the Tennessee No 09

The soul of Harlem and the heart of Texas – A Jay Wade and the Tennessee No. 09 serve up hot jazz with a decidedly country sound in the tradition of America’s 1930s and ’40s South Western dance halls. This London based band brings that thrilling Western Swing rhythm to the Victory Marquee dance floor! 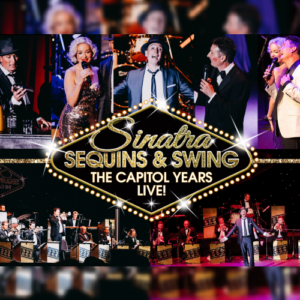 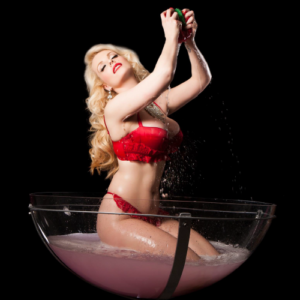 With a special appearance from: Isabella Bliss.

Endorsed by the Sinatra family’s Europe representative, the spectacular-sounding, visually-evocative Sinatra musical like no other celebrates the iconic hits, vocal majesty & Hollywood glamour of Sinatra’s sensational Capitol Records years of 1953-1961.

It’s 1961 and Sinatra is here to share the magic moments of his Capitol years in a one-off spectacular concert evening.  Backed by the Capitol Orchestra, he’ll re-live classics like Chicago, Lady Is a Tramp, Come Fly with Me, It Happened in Monterey, Brazil, I’ve Got You under My Skin and many more, and revisit key song-scenes from some of his legendary movie & TV specials.  Alongside, enjoy songs from Capitol Records stablemates, Peggy “Fever” Lee & Bobby “Mac The Knife” Darin, vocally mesmerising Marilyn Monroe, lots of laughs and a surprise guest!

“I have seen many Sinatra/Rat Pack/Swing shows, but this has got to be the best” – Theatre reviewer, The Modish Male

Isabella Bliss is undeniably one of the most popular burlesque artists on the UK cabaret scene. She is the star of the internationally acclaimed tour ‘An Evening of Burlesque’ (seen by over 250,000 people to date) as well as performing on the London west end stage. Her signature 5ft champagne glass act headlines the show. Isabella and her dazzling performances bring an air of sophisticated glamour to every event with a touch of sparkle and finesse.

Isabella has performed for an array of high profile clients and has been featured on TV in an advert for Peugeot and also in the hit E4 series Drifters. 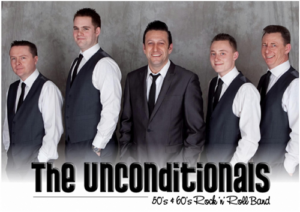 EVENING ENTERTAINMENT IN THE VICTORY MARQUEE

The welcomed return after a few years away from the show touring the globe. The Unconditionals are back. Expect a wild night of rock n’ roll in the Victory Marquee. The band always pack out the room so we are really excited to invite them back this year performing alongside some of our day time performers as special guests.  DJ & Burlesque from Retro Rosy Apples. 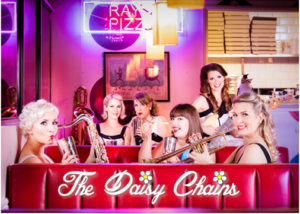 EVENING ENTERTAINMENT IN THE VICTORY MARQUEE

Wednesday night it’s ….‘All shook up’ with The Daisy Chains

Live vocals from six petticoated girls, as they each sing solos and beautiful harmonies throughout the set. Not to mention the incredible instrumental solos! The band boasts incredible musicians, all playing live! The line-up comprises: Trumpet, Tenor Sax, Guitar, Bass, Drums, and either Baritone Saxophone or Trombone. And all this in a Vintage '50's and '60's Rock' n' Role style, from the music to the clothes. We hope to take people back in time to the golden age of music. Come and party with us! + DJ retro Rosy 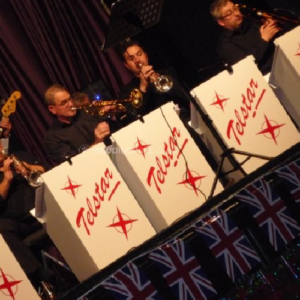 75th Anniversary Of The End Of WW2 Dance.

We welcome back the Telstar Big Band. Formed in 2005 by Trumpet player David Bradford as a rehearsal band, it is now one of the most sought after big bands on the 1940s scene. The band is a full 16 piece swing orchestra with saxophones, trombones, trumpets and rhythm section - the same formation as the legendary Glenn Miller Orchestra. The band are thrilled to return to War and Peace Revival after a number of years and promise a great night’s entertainment to celebrate the 75th anniversary of the end on WW2"

To keep you dancing we also welcome back DJ retro Rosy.

All evening events are free to enter to on-site residents with a wristband. Alternately those visiting for the day, evening-only tickets are available for purchase for entry to the evening entertainment after 6pm